“For both Dominion and Duke, actual electricity consumption has been essentially flat for the past few years, leading the utilities recently to be less optimistic about growth,” states a September 8 report from the Institute for Energy Economics and Financial Analysis (IEEFA). The pronouncement is based on recent revised growth forecasts from both Dominion Energy and Duke Energy, principal partners for the Atlantic Coast Pipeline.

IEEFA’s report notes that “Duke has revised its long-term energy demand significantly. Duke Energy Carolinas, which was forecasting average growth of 1 percent per year in 2014, is now forecasting 0.4 percent per year growth. Duke has also reduced the new natural gas plant capacity that it plans to construct by the end of the decade.”  It was a Request For Proposal from Duke that led Dominion Energy to make the original proposal in May 2014 for the ACP to be built.  The report also notes that while Dominion’s new forecast calls for a smaller growth trajectory than the company projected in 2011, the company’s actual sales in 2017 are at the same level as 6-years ago. 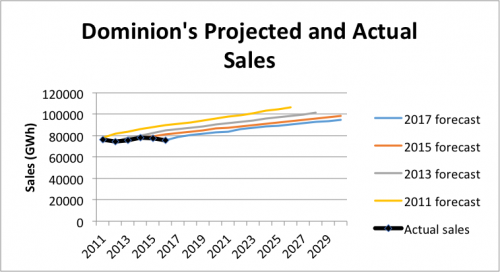